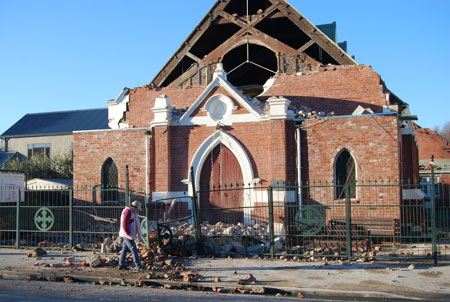 Crisis Mapping in an Emergency: The Canterbury Experience

Access to up-to-date information is a critical component of any disaster recovery programme. First responders, civil engineers, medical professionals, electricians, local and regional officials, media and, of course, the public all need to know which buildings have been damaged, which buildings contain hazardous substances or critical infrastructure, the status of water and wastewater services, which roads are open, where shelter, water and toilet facilities are located and a host of other questions that need answers. In Canterbury, in the aftermath of the 7.1 magnitude earthquake on 4th September 2010, GIS (geographic information system) provided the answers.

“Within 24 hours of the earthquake,” says Iain Campion, Team Leader Information Systems at Environment Canterbury, “we had internal, secure external and public external web-based GIS sites up and running. The internal and secure sites showed areas of damage, emergency call outs, post earthquake satellite and aerial photos as well as other information.

“The external secure web site,” continues Campion, “was created for emergency services and government agencies involved in the response, and was set up in such a way that information could be exchanged quickly and securely during the event.” The public-facing web site was extremely well-received…it received more than 6.5 million ‘hits’ within the first three days of the event.

Hazardous substances in damaged buildings pose a direct threat to first responders as well as the public. Environment Canterbury’s Hazardous Response Team is usually responsible for containing hazardous substance spills and ensuring the safe disposal of that material. But after the quake, they had another role…to immediately inspect every building containing hazardous substances to check the integrity of the hazardous materials. And, if there were any ruptures, to cordon off the area and secure the spill. But with so many damaged buildings, they needed to know which ones to inspect first.

“We had a register of potentially hazardous sites as well as the major consent holders that had consents to store chemicals,” explains Campion, “so we had a good base to start from. Within a half hour we were able to send out teams with printed maps with the locations of potential spills. As the teams reported back – field staff visited over 800 individual sites - they would update the status of the sites they had inspected using SharePoint. We would then update the GIS – our own system called GISmo, based on ArcGIS software from Esri and supported by Eagle Technology - and print out the updated maps for subsequent teams. We would also update the maps with features such as road closures and any other information.”

Agencies affected by the earthquake may have had systems down, so having a web map accessible only through a browser was helpful when resources were displaced from normal operations. “One of the data layers we found extremely useful was areas of potential liquefaction,” says George JasonSmith, Principal Asset Management Professional for AECOM under contract to Engineering Lifelines, an arm of The Canterbury Regional Emergency Coordination Centre. “We were able to overlay the areas that would have the potential for damage from liquefaction – where the soil might liquefies due to the shaking – and cross-reference these areas with call-outs. We identified areas with high-probability of damage but without a corresponding number of alerts. So crews were despatched to check on the well-being of the people and buildings in those areas. While it turned out that the areas were not as badly affected as feared, it was a tremendous advantage to have these tools at our disposal to help mitigate the effects.”

GIS has also played an important role in the recovery process for many of the lifeline utilities. “GIS has been used to develop recovery strategies for underground utilities such as water and sewer mains,” says Joanne Golden, from Engineering Lifelines Coordination, “where damaged or weakened assets cannot always been seen from the surface. The ability to link asset data to above ground observations and knowledge of the experienced operators has been valuable.”

Teams of two working in 24/7 shifts needed to hand digitise critical information from situation reports coming into Regional Civil Defence at Environment Canterbury. Under normal circumstances spatial data exchange would be done through electronic means but unfortunately this method was not always available during the initial days in the event. The local authorities either had their own systems down or staff were occupied fully in supplying their internal resources with information to target areas to be remedied.

There was also an incident site made available to the public during the event. This web site enabled the public to view information like damaged services and where cordoned off areas were located. Users could also turn on layers for crowdsourced (ie submitted by the public) information.

In the aftermath of a major event, information is critical. And if that information is accurate and accessible, the information becomes invaluable. In Canterbury, after their earthquake, the GIS team proved that today’s technology is up to the challenge, with significant potential to further improve disaster management.

The main benefits of Canterbury’s GIS (GISmo) are:

The main benefits to users are that: