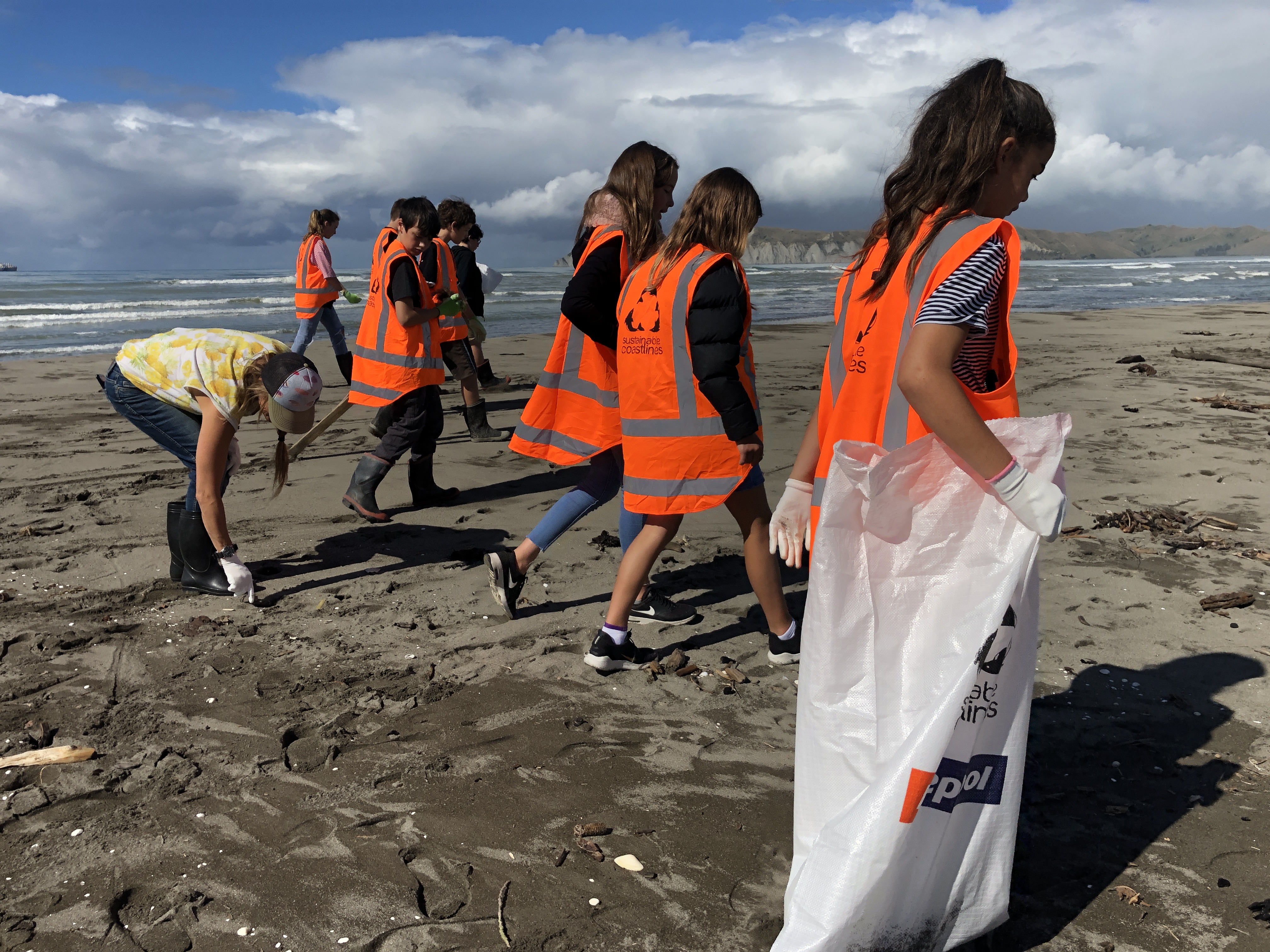 The town of Gisborne, New Zealand, located on the east coast of the northern island, is endowed with stunning waterways and beaches. But as in most beach towns these days, residents and visitors often see trash strewn across the sand.

This made it an ideal place for Sustainable Coastlines—a nongovernmental organization (NGO) that helps clean up beaches—to set up a litter intelligence pilot program at a local high school. In 2019, Sustainable Coastlines began working with students at Campion College to measure and analyze beach litter and take steps to solve the problem by using geospatial technology.

Year 11 student Georgia Jobson got a crash course in how to use storytelling to persuade people to take action. Campion College participates in the GIS in Schools program run by Eagle Technology, Esri's distributor in New Zealand and the South Pacific, which Sustainable Coastlines is part of. It encourages young people in New Zealand to use GIS to develop geographic literacy, spatial awareness, critical thinking, and analytical skills.

The litter intelligence project culminated in students using ArcGIS StoryMaps to build narratives that show just how far their local beach litter can travel. And their work made it all the way to the United Nations (UN) as an example of how citizen scientists around the world can contribute to achieving the Sustainable Development Goals (SDGs).

The 12 students who participated in the citizen science project picked a defined patch of sand at Big River (also known as Waipaoa River) on Waikanae Beach—close to their school—to carry out a litter study. Wearing high-visibility vests, they measured out a 100-by-20-meter (328-by-66-foot) transect near Big River to audit the litter there. Their task was to identify the most common types of litter found in this cross section of beach, using methodology put forth by the UN to ensure that the data they collected was as accurate and reliable as possible.

They used their smartphones to collect and record data in Sustainable Coastlines' Litter Intelligence app, which employs artificial intelligence (AI) and Microsoft Azure's Cognitive Services suite to quickly classify litter. The students then uploaded the results to New Zealand's national litter database, which published them as an official survey and provided valuable insight into how to create a litter-free New Zealand. This enabled the students to compare their discoveries with the amount and type of litter typically found at other beaches and waterways across the country.

After finishing three surveys, which lasted two and a half hours each, the students saw that the items they collected included fragments of glass, bottle tops, food wrappers, cigarette butts and filters, lollipop sticks, polystyrene insulation or packaging, construction materials, and various unidentifiable scraps of plastic. The most common offender was chippie wrappers, or chip bags.

In her ArcGIS StoryMaps narrative, Jobson recorded photos of some of the litter she and her classmates found, including pieces of plastic, clothing items, and cigarette butts. The students then used simulation software to identify where else this litter might end up throughout Gisborne and even farther up the coast, based on wind patterns and ocean currents. They learned that there was a high probability that some of the litter would travel 80,000 kilometers (about 50,000 miles) to the South Pacific Garbage Patch, meaning that their town—among many other places in the world—contributes to this global marine pollution problem.

Students Develop a Plan of Action Based on Storytelling

Now that these citizen scientists understood the extent of the litter problem that plagues their local beaches, they wondered how they could play a part in trying to solve it. So they developed a plan of action. It included publicizing the issue using the data they had collected to back up their claims. The students also came up with the idea of staging a wearable arts show in which they and their teachers wore garments made from the waste they found to raise awareness about the problem within the community.

Because storytelling was going to be the most powerful way to convey their message, the students took an intensive storytelling course, hosted by Sustainable Coastlines, to find out how to effectively influence people. Using ArcGIS StoryMaps, the students documented their investigation and beach cleanup stories by combining text, interactive maps, and other multimedia content into compelling narratives. They also employed Map Viewer in ArcGIS Online to showcase local places of importance, such as their homes and school, and add context to where the litter in their study was found.

Finally, these citizen scientists took to the streets to ask locals if they would help the town move to paper wrappers for food packaging when possible. One student, Georgia Jobson—who at the time, was a year 11 student at Campion College—contacted the local newspaper, the Gisborne Herald, to ask if it would cover the beach survey story. Sure enough, a journalist picked up the pitch and, instead of putting the article in the student section of the newspaper, made it a lead feature.

"It's great to see organizations like Sustainable Coastlines taking an active approach to using GIS within schools that goes beyond the core curriculum," said Ted Taylor, GIS account manager for Eagle Technology. "We're keen to continue supporting exciting use cases of GIS and to push the boundaries of what can be done through the GIS in Schools program."

The litter intelligence project became part of another ArcGIS StoryMaps story that was presented at the United Nations (UN) as an example of how citizen scientists can help achieve the Sustainable Development Goals (SDGs). According to Jobson, there's really no end to her story because "[i]t must go on until we solve the problem," she noted in her ArcGIS StoryMaps narrative. "I'm going to use my strengths to make the beaches clean again, and most of all, I'm going to continue to protect the things I love," she concluded.

Thanks to the success of Sustainable Coastlines' litter education program with Campion College, the NGO is rolling it out to more students in New Zealand. In total, 60 schools across Aotearoa (the Maori name for New Zealand) are now involved in the project. And the fact that Sustainable Coastlines provides these communities with the training, equipment, and technology they need to collect high-quality, authoritative data means that the results of the projects can be used for regional, national, and even international reporting on litter abatement.

"It's so important that we all have equitable access to scientific data and information to enable informed decisions for our communities," said Becky Taylor, the education coordinator at Sustainable Coastlines. "Young people now have access to this data. They also have the agency to be part of producing it. This is exciting. Having ownership of the data is enabling young people to take direct action to solve the problem of reducing the consumption and production of single-use plastics in their communities."

To learn more about Eagle Technology's GIS in Schools program, email gisinschools@eagle.co.nz or visit the GIS In Schools page